The Secret Gardens of Spitalfields

I love walking around Spitalfields in East London, along its cobbled streets admiring the wonderful Georgian terraced houses, so when I read about the opportunity to visit some of these houses’ hidden gardens, I just had to make the journey!

These few remaining streets of Georgian townhouses are all that are left after widespread demolition in the 1960s and 1970s. Originally they were the homes of silk merchants and weavers, many of them of Huguenot origin, who fled their homelands due to religious persecution.

Typically the houses had four storeys and a garret. The ground floor was traditionally  used for business purposes, with the kitchens and servants accommodated in the basement.

The upper floors provided the living quarters and have high ceilings. On the top floor, the garret rooms where the weavers worked, feature large windows which lit the silk looms.

For just one day several local residents had generously opened their gardens as part of the National Garden Scheme Open Gardens 2015 raising funds for charity. 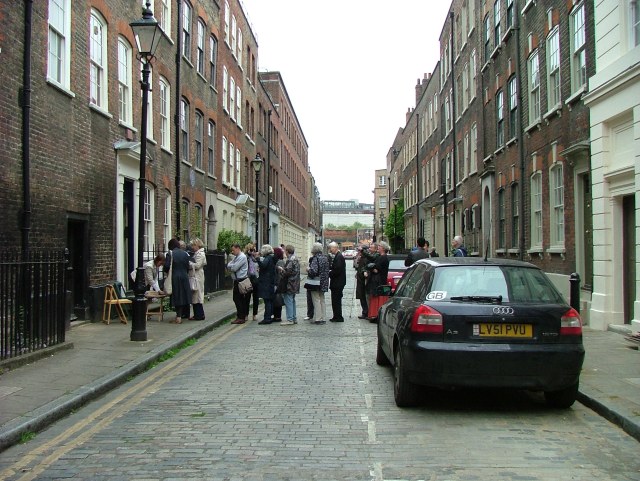 As most of the gardens are so small, visitors were allowed in a few at a time…I wasn’t quite the first in the queue on this overcast Saturday morning in June!

It was wonderful to go behind the grand front doors, passing through panelled halls and  tastefully decorated rooms painted in traditional colours…like a Farrow and Ball paint chart come to life! To be able to access the tiny private gardens if only for a short while was a delight to absorb their atmosphere, meet and chat to their creators and revel in the history of this remarkable time capsule.

The first thing that struck me was the attention to detail and the lavish care and attention that the makers of these gardens had taken. As a Garden Designer many clients complain that these days garden plots are so small, but in Spitalfields today it was inspirational to see just what could be done with a very small space.

A beautiful grouping of different greens and not a slug in sight near the Hostas!

Lots of containers featured in the gardens

Given the nature of the terraced houses all garden materials, compost, pots, plants and trees all have to be brought through the house! 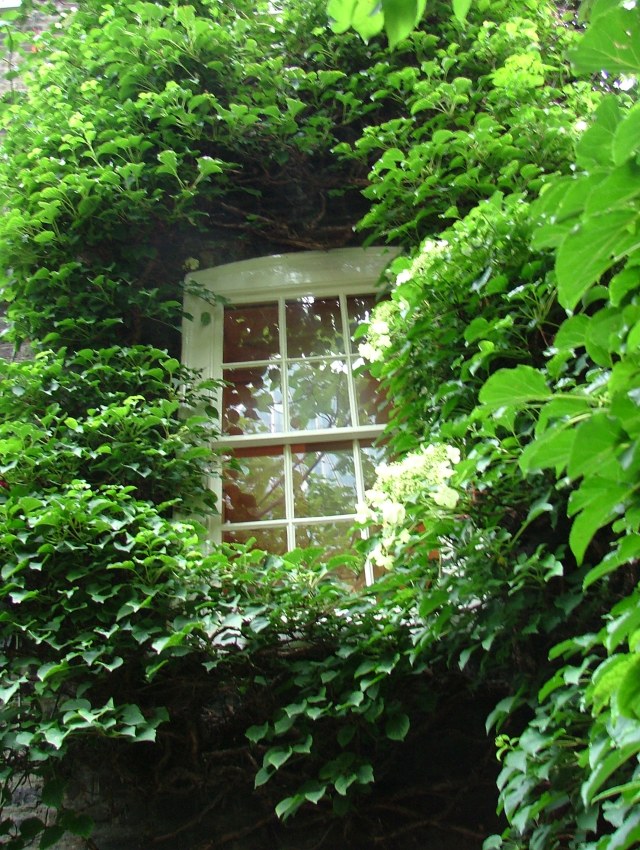 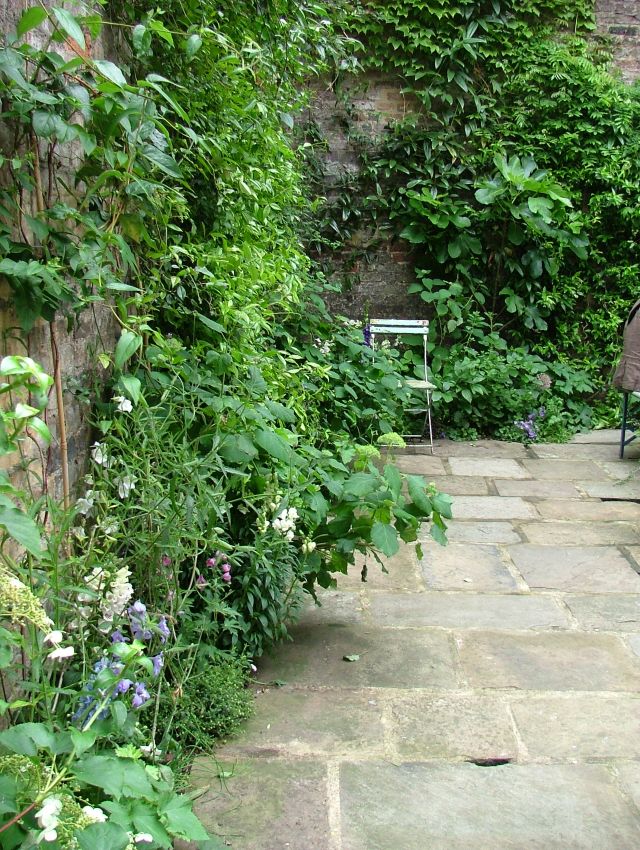 In tiny gardens, and some of these smaller even than a Chelsea Flower show garden, every surface vertical or horizontal is used to good effect.

Soleirolia or ” Mind Your Own Business” plants thrive in these shady courtyard gardens…spreading in some cases to look like a small lawn!

Roses here must have a head for heights!

Close to the busy Commercial Street and the hubbub of Brick Lane and Spitalfields weekend markets just around the corner, these gardens were a little oasis away from the hustle and bustle of the outside world. With high walls surrounding them the gardens have their own microclimate and touches of the exotic were much in evidence!

A touch of the exotic!

Gardens can never have too many areas in which to sit and relax! 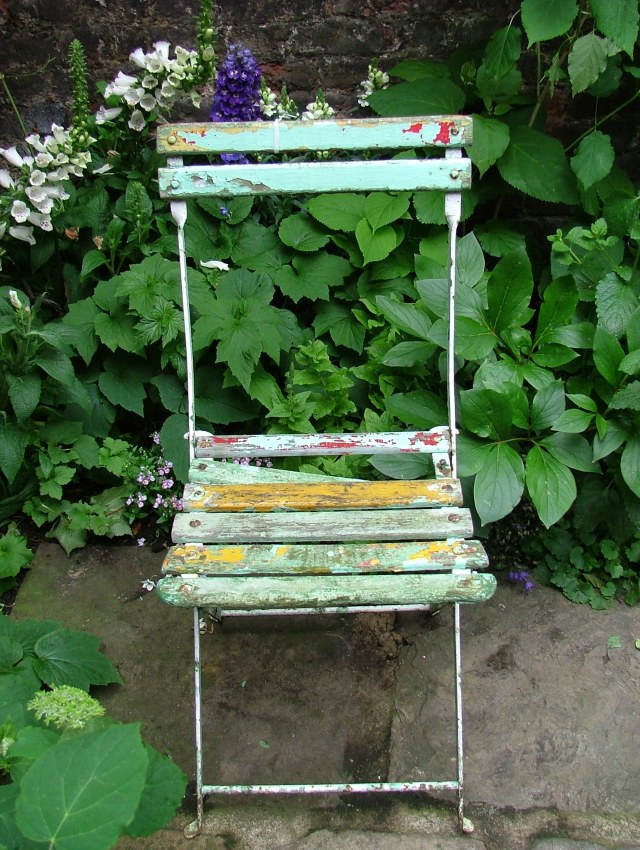 Apart from the temperature this could be Italy! 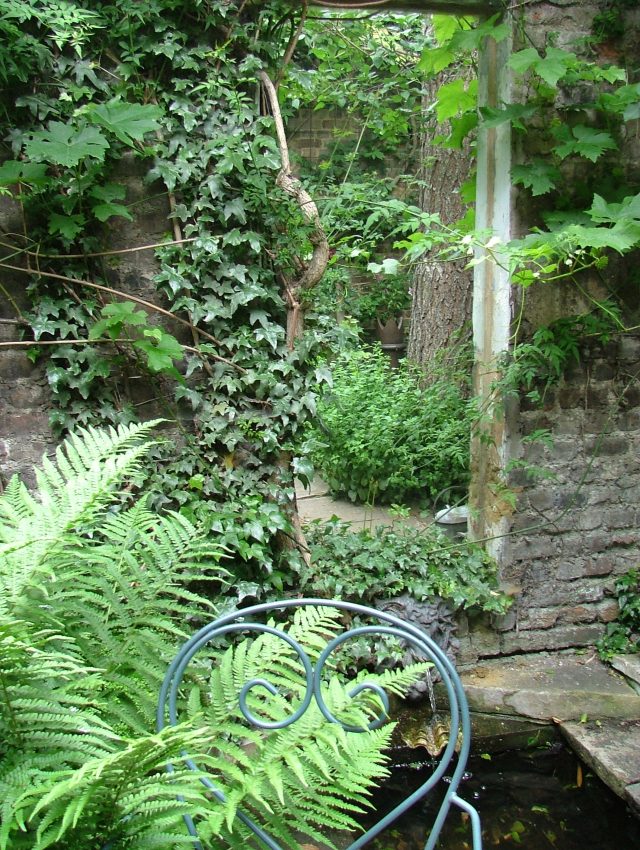 A mirror fixed to the wall adds another dimension.

Even though the gardens are small, some owners had divided up the space available to make mini garden rooms. 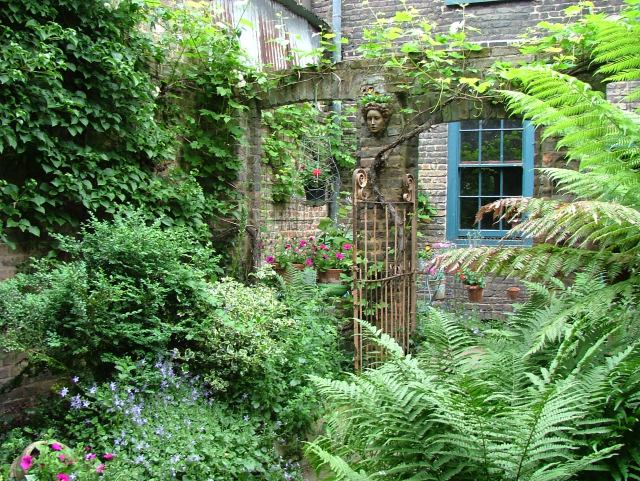 The renovation of these historic houses often reveal old features which can be repurposed! 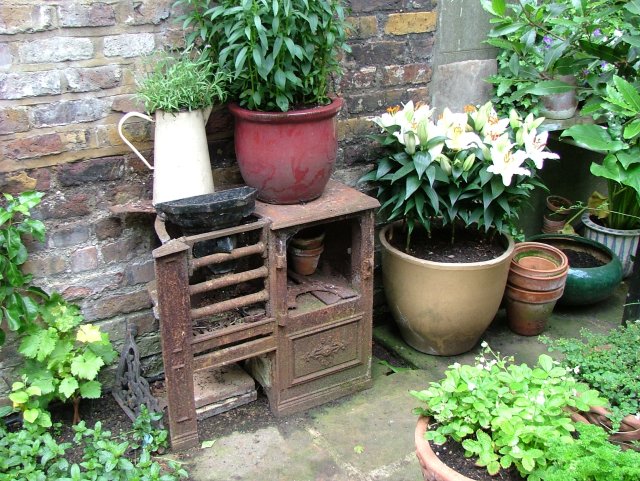 An old cooking range becomes a stand for plants!

The renovation of one house was unusual using the basement levels for an impressive water feature!

From the house looking out…

and from the garden looking in!

One of the open gardens was a commercial property with the stableyard and coach house not an immediately obvious place for a garden!

Once inside though the ingenuity and creativity became obvious! Artificial grass used to good effect too!

Planted up with flowers and vegetables!

Not an inch of space wasted…even the stairs come in for the floral treatment!

Speaking with the person responsible for maintaining this garden it was clear that constant attention and watering is essential…as was a good pair of stepladders I would imagine! It was good to hear that he sourced his plants from the nearby Columbia Road Sunday flower market. It dawned on me that living in this built up area of the city presented its own challenges when it comes to obtaining and transporting plants and composts, with no DIY store or garden centres close at hand.

The last stop of the day was The Town House 5 Fournier Street a gallery and shop selling antiques and more importantly teas, coffees and cakes in its basement café! 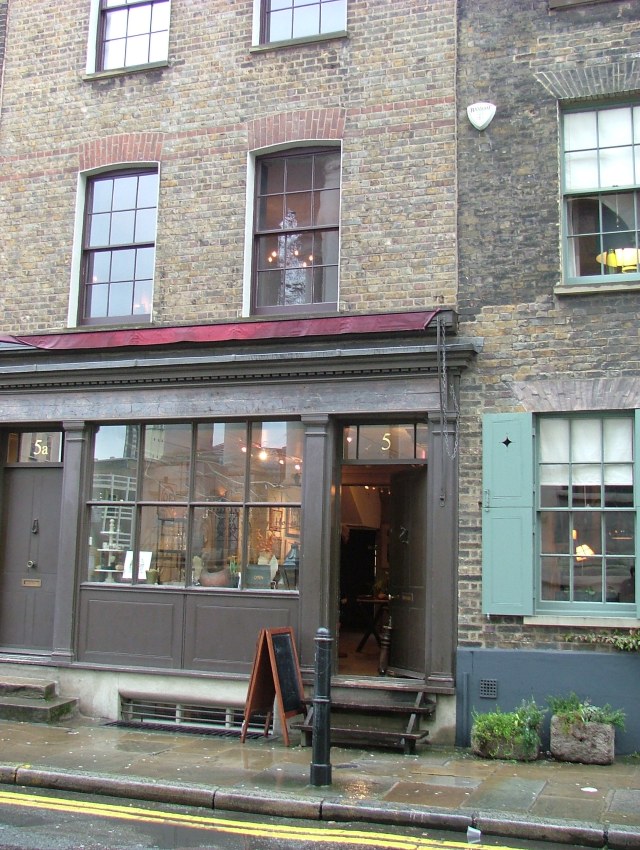 The garden here was full of the open day visitors and I met up again some people I had spoken to earlier in the day whilst we compared our thoughts on the gardens we had seen over a cup of coffee.

I have used some images of Paul’s tiles in recent articles and on speaking to Charlie de Wet one of the organisers of the Huguenot Summer Festival running this year, Paul has produced some tiles for an event that will feature in the festival.

As I walked back to Liverpool Street Station through the busy Saturday afternoon crowds I realised how the hidden gardens that I had been lucky to experience were a much needed antidote to living in such a busy City. I am grateful that their owners allowed access to their idiosyncratic private places which they clearly devote much love and effort to maintaining and so obviously enjoy. Thanks once again for sharing them with the wider public.

It was also a privilege to see inside these remarkable restored houses in the context of their time capsule streets. I hope that other parts of the area such as the Liberty of Norton Folgate are preserved and through public pressure can manage to resist the current threats from British Land to sacrifice more of the historic Georgian buildings for the sake of yet more high rise glass and steel office blocks. such as those at the end of the street below.

If they go they have gone forever…

14 Responses to The Secret Gardens of Spitalfields

I'm a Tide Travelling Mudlark on the River Thames foreshore. Join me in my adventures through liquid history. Check out the menu links for video, writing and multimedia explorations.