A couple of months ago whilst walking through the picturesque Worcestershire town of Great Malvern, I spotted a door of an old building with an unusual sign…”The Theatre of Small Convenience”!

Reading the notice below, this tiny building, transformed from an old Victorian Gentleman’s lavatory, now houses the smallest theatre building in the world!

Unfortunately the door was shut that day so I was unable to take a peek inside, however I recently noticed that it would be open for selected dates over the Christmas period, with performances of a play written by the theatre’s founder, Dennis Neale. The theatre is now managed by Malvern School of Art.

Last week I was back in town and this time the door was open and Dennis welcomed us into his tiny theatrical world.

Over the stage the latin motto, ‘Multum in Parvo” which means “Much in Little”

The theatre seats just 12 people and Dennis explained how over the past 19 years until his retirement, he had decorated and constructed the theatre from odds and ends scoured from reclamation yards and junk shops. His son, an artist also assisted with the wall murals and decoration. 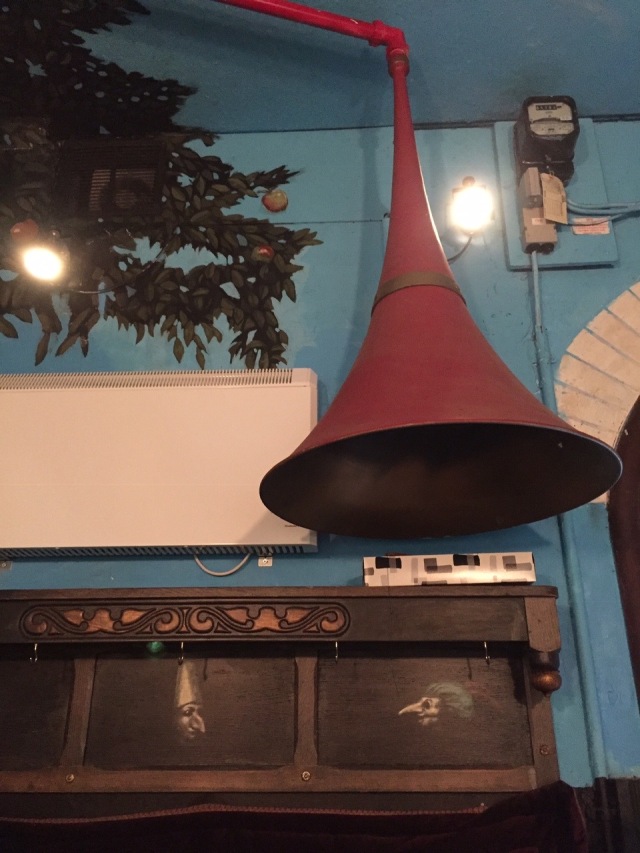 He also appropriately painted some of the masked characters from the Commedia dell’Arte underneath the sound system which was once a PA speaker on a parade ground!

The insides of an old piano provide useful sound effects for the theatre! 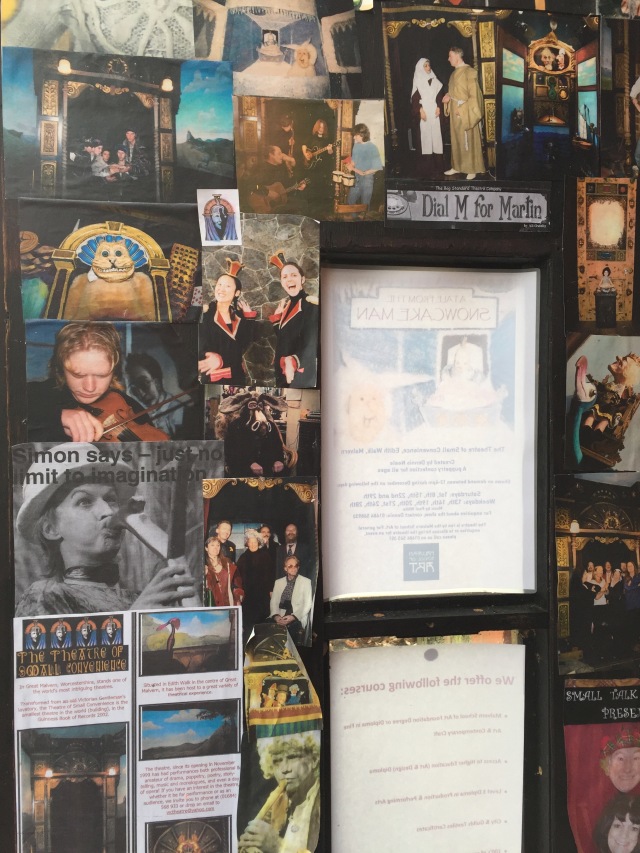 The theatre has hosted all types of performances in the past including a day of opera!

Also along with Shakespeare performances there have been poetry readings and story telling, music and monologues and of course puppetry!

We took our seats for the performance of a short play, actually about 5 minutes long,  written and performed by Dennis entitled the “The Tale from the Snowcake Man”.

The scene is set in a wintry palace where all the food is sweet and it featured amongst other characters, a singing robin, Jack Frost, some white mice and some jelly beans all housed within the body of the Snowcake Man!

It was a delightfully quirky Christmas tale set within a magical world and performed in the most curious of buildings…probably the shortest play I have ever seen and certainly in the smallest ever theatre!

Dennis Neale the founder and his creation the “Snowcake Man” takes a bow!

So if you are ever in Great Malvern and find yourself in the vicinity of Edith Walk do look out for this magical fantasy world hidden behind a Victorian facade and if the door is open do take a look inside…you never know what you might find!

I am a garden designer living and working in rural Worcestershire For more information and to see examples of my work see www.anneguygardendesigns.co.uk
View all posts by Anne Guy →
This entry was posted in Curiosites, Great Malvern, Theatres, Uncategorized. Bookmark the permalink.

9 Responses to Theatre of Small Convenience