It has been a while since my last article so during these cold and wet late January days I am taking time to catch up with some of places I visited last year whilst away from the drawing board.

Now where was I?… oh yes Wapping…

On a wet and grey Monday I travelled to Wapping an area east of the Tower that I have always wanted to explore.
My main purpose for being in this area of the city today was an evening visit to Wilton’s Music Hall for a guided history tour of this historic remnant of Londons theatrical past. 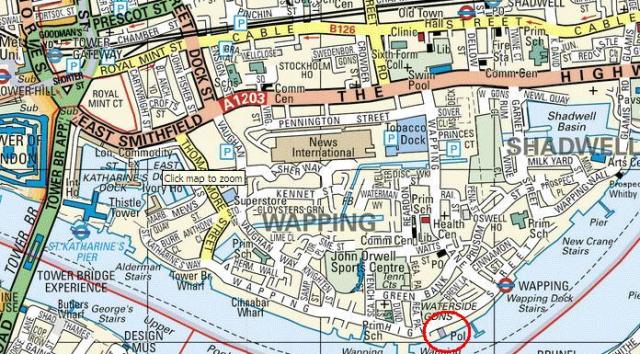 A good spot for an old fashioned lunch was called for on this chilly day and where better than at the historic Town of Ramsgate pub? There has been a pub on this site since the 1460’s and after several incarnations as The Hostel and the Red Cow it became known by its present name in 1811. 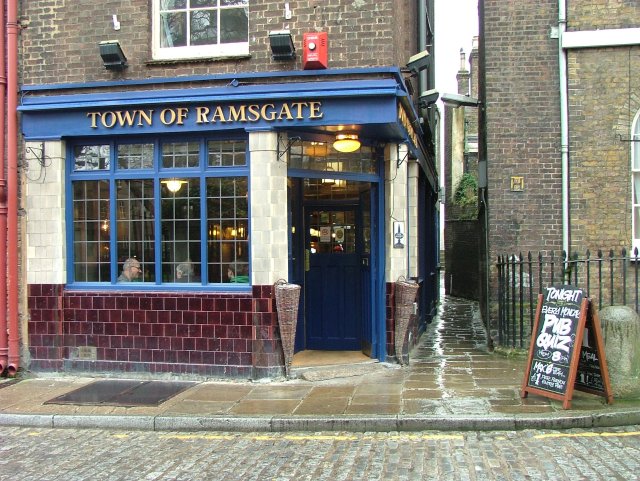 The reference to Ramsgate came about from the fishermen of that Kentish town who landed their catches at Wapping Old Stairs which can be reached via the side alleyway. These fishermen apparently chose Wapping to bring their catches ashore rather than paying river taxes further upstream closer to the Billingsgate Fish Market.

The pub became famous as the notorious Judge Jeffreys was caught outside trying to escape aboard a ship to Hamburg after the 1688 Revolution which overthrew King James II. 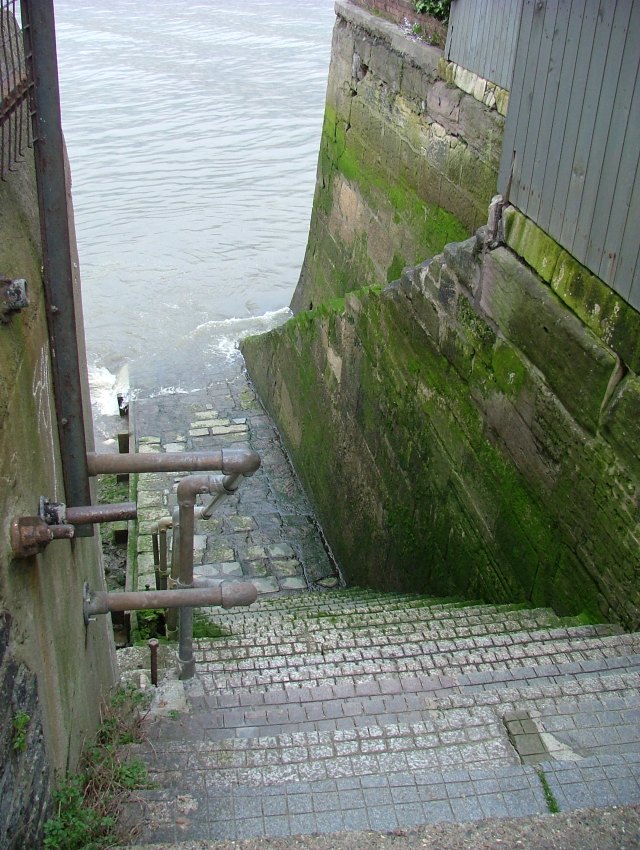 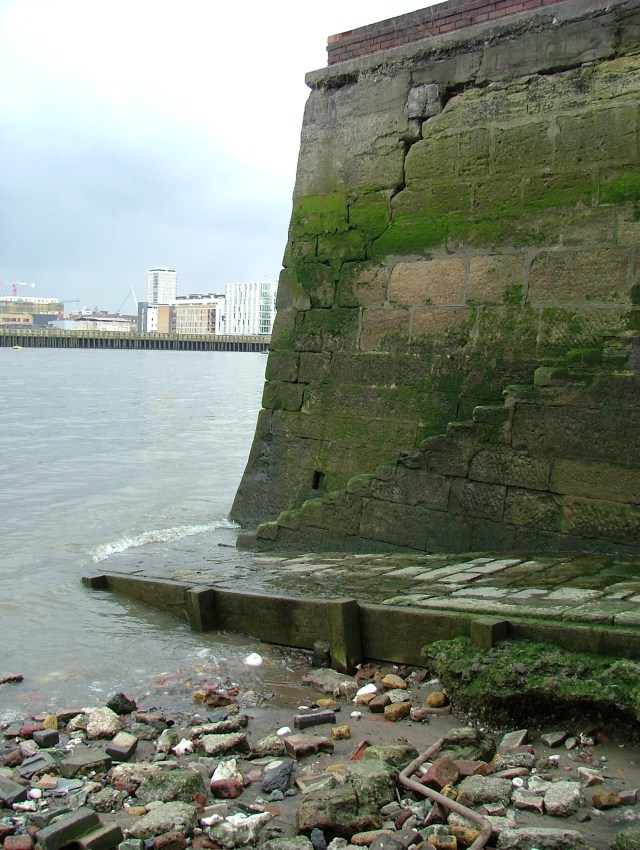 The Thames Foreshore – at low tide you can still see the post where condemned pirates were chained to drown as the tide rose.

After a hearty lunch of steak and kidney pudding (you can’t get much more traditional than that), further enlivened by the mix of clientele including a film production company on location and a Jewish funeral tea, I set off to discover the streets of Wapping, a place that to me until now was simply an area synonymous with the newspaper disputes in the 1980′s.

The regenerated warehouses now converted into desirable residential apartments line the empty curving streets. It was strangely silent given it close proximity to Tower Bridge and the City as I walked the deserted streets once alive with the sounds of the many trades associated with its maritime past. 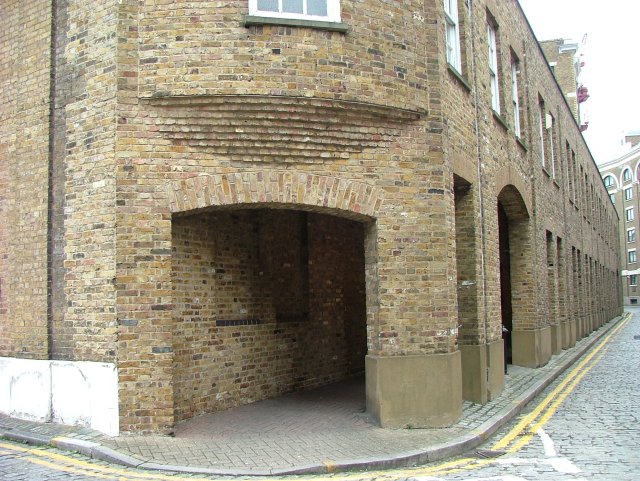 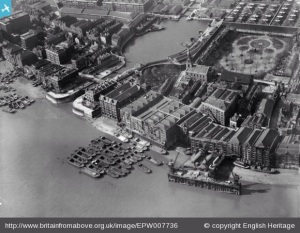 Wapping as it was 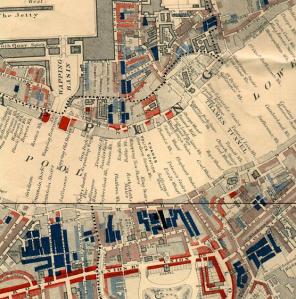 The entrance to the former Wapping basin can clearly be seen today but now drained it is an ornamental garden for the elegant houses which overlook it. 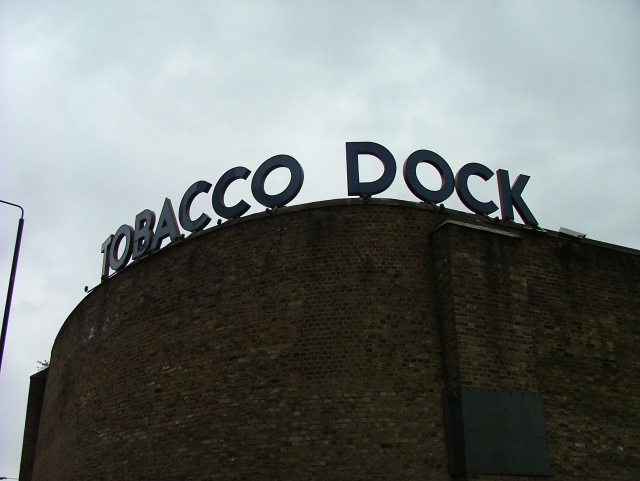 A walk around the high dock walls of the former News International print works bordering Pennington Street nicknamed Murdoch’s “Fortress Wapping” during the disputes, saw me arrive at Tobacco Quay and Dock as its name suggests an unloading point for cargoes of tobacco. This area was redeveloped in the 1990′s to house a Westfield style shopping mall which whilst built and partially opened  never really saw the commercial light of day due to the recession.

It was an empty place today save for some security staff who told me I was not allowed in as there was a private function taking place that afternoon.The malls lie unvisited and devoid of their intended shops.

One of its more recent high profile uses was as a place to billet the members of the British Armed Forces who helped to provide security at the 2012 Olympics.

Whilst it is often used as a film location its future is unknown, owned by a Kuwaiti business concern it may indeed surface again when the St Georges redevelopment of the former print works gets underway. This development, currently in the planning stages, proposes some 1,800 homes including some 25 storey buildings.

On towards Wilton’s Music Hall… 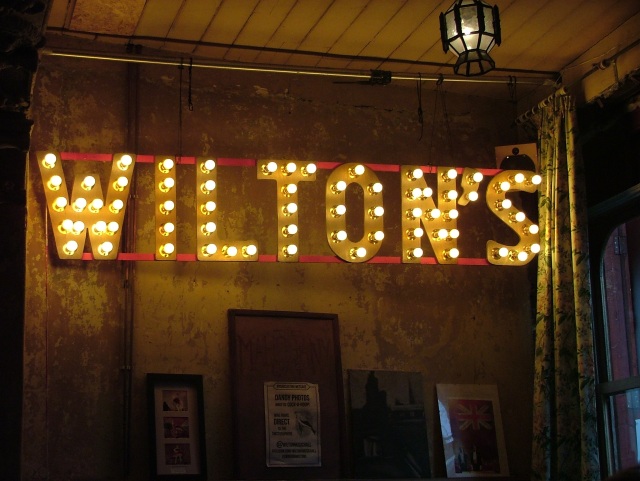 Turning the corner from Tobacco Docks the peace and quiet of the back streets of Wapping was shattered when I reached the busy A1203 the road now called The Highway”.

This route dates back to Roman times and was previously known as the “Ratcliff Highway” from the red sandstone cliffs which ran from the road to the Thames.

In the 19th century it had a notorious reputation for vice and crime and was the location of the infamous murders of two local Wapping families in 1811.

Today The Highway runs west-east from the eastern edge of London’s financial district of the City to Limehouse in the east.

After some minutes trying to cross this busy thoroughfare, I passed by St George Church in the East one of six Nicholas Hawksmoor churches in London. It was built between1714 and 1729. Note to self – visit all the churches on another trip!

St George Church in the East

I made my way towards Wellclose Square passing by Swedenborg Gardens and Stockholm House, their names relics from the past communities of Scandinavian seafarers involved in the timber industry who settled there.
A Danish church was built in the centre of Wellclose Square in 1696, unfortunately it no longer exists as it was demolished in 1870. Turning out of Wellclose Square I found myself in the narrow passageway known as Graces Alley and the home of Wilton’s Music Hall. 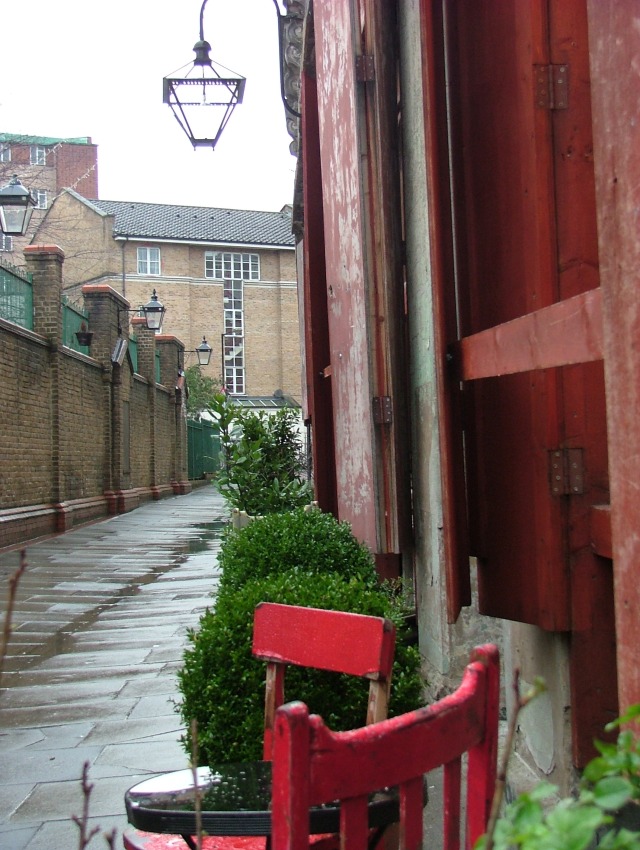 The mismatched and peeling paint just adds to its charm 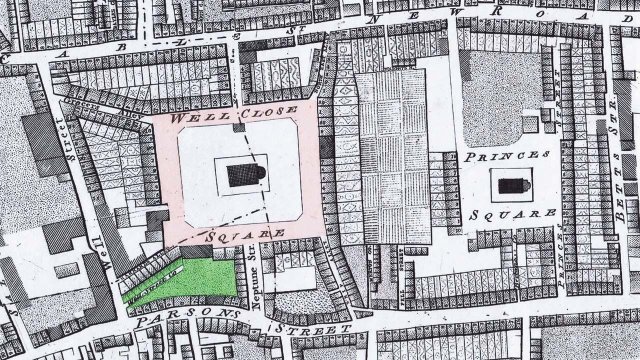 Wilton’s is a unique building comprising a mid-19th Century grand music hall attached to an 18th Century terrace of three houses and a pub. Originally an alehouse dating from 1743 or earlier, it may well have served the Scandinavian sea captains and wealthy merchants who lived in the nearby Square.

From 1826, it was also known as The Prince of Denmark or The Mahogany Bar, reputedly because the landlord was the first to install a mahogany bar and fittings in his pub. In 1839 a concert room was built behind the pub and in 1843 it was licensed for a short time as The Albion Saloon, a saloon theatre, legally permitted to put on full-length plays. 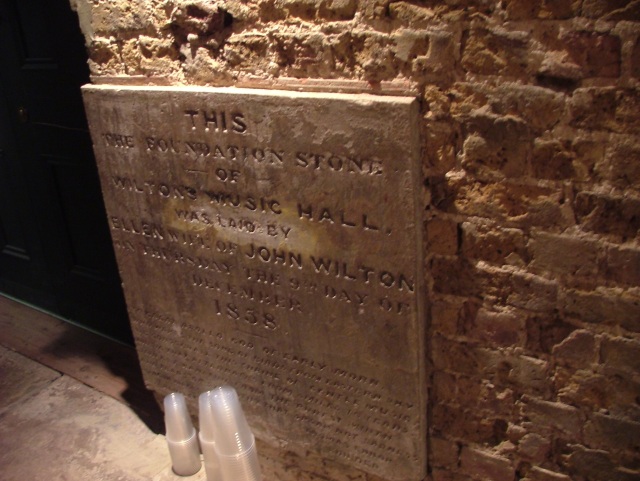 The foundation stone for Wilton’s

Wilton’s came into the ownership of John Wilton from Bath, the son of a butcher, whose early career was as a solicitors clerk, a job which probably proved useful when dealing with licensing magistrates for the hall! He enlarged the concert room and replaced it with his ‘Magnificent New Music Hall’ in 1859 built across the back of the original 18th century terraced houses – the join can still be seen to this day!

The hall was furnished with mirrors, chandeliers and decorative paintwork, and he installed the finest heating, lighting and ventilation systems of the day.

The painted walls of the balcony 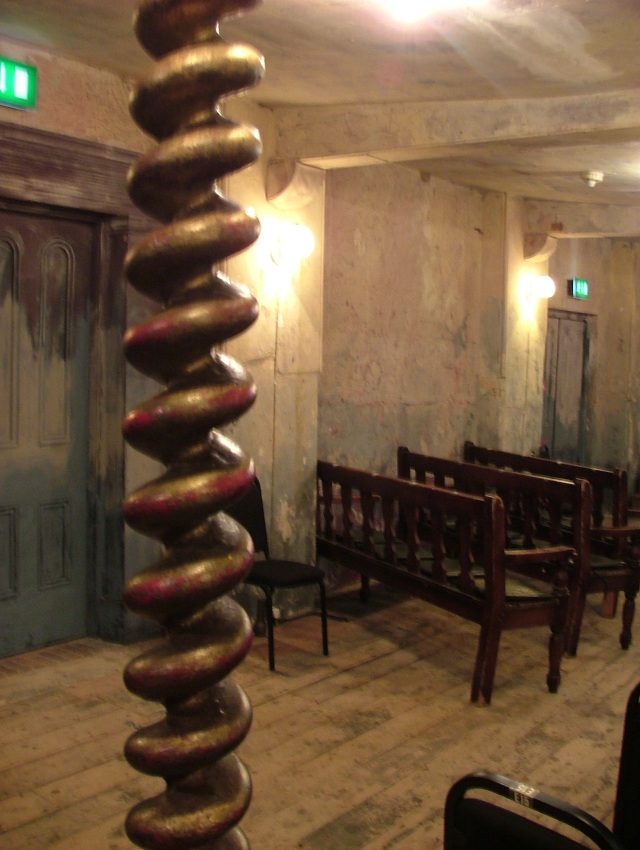 Its proximity to the Port of London and its location sandwiched between the City and the river, stimulated the development of popular entertainment for a cosmopolitan audience. Madrigals and excerpts from opera were initially the most important part of the entertainment, along with the latest attractions from West End and provincial music halls along with circus, ballet and fairground acts.

In the thirty years Wilton’s was a music hall, many of the best remembered acts of early popular entertainment performed here, from George Ware who wrote ‘The Boy I Love is up in the Gallery’ made famous by Marie Lloyd, to Arthur Lloyd and George Leybourne (Champagne Charlie) two of the first music hall stars to perform for royalty.

Towards the end of the 19th Century the East End had become notorious for extreme poverty and terrible living conditions. Religious organisations tried to help and In 1888 Wilton’s was bought by the East London Methodist Mission, renamed The Mahogany Bar Mission. During the Great Dock Strike of 1889, a soup kitchen was set up at The Mahogany Bar feeding a thousand meals a day to the starving dockers’ families.

Open for nearly 70 years the buildings survived through some of the most testing periods in East End history including the 1936 Mosley March around the corner in nearby Cable Street and the London blitz.

After the second world war the area was subject to local authority compulsory purchase and scheduled for demolition as part of the slum clearance schemes of the 1960s.

The Methodists had to leave and Wilton’s was scheduled for demolition. Fortunately a campaign was started to save the building with support from persons such as Sir John Betjeman, Peter Sellars and Spike Milligan and was Grade 2* listed in 1971. However it remained empty and fell derelict from 1956 onwards, suffering much structural damage and decay.

It started to live again as a theatre and concert hall in 1997 and under the management of its current director Frances Mayhew and with the support of friends and lottery funding it continues to go from strength to strength as a cultural centre for the East End.

As an interesting aside, the current bar was a prop acquired by the trustees from the film Sherlock Holmes – A Game of Shadows directed by Guy Ritchie which was partly filmed in the theatre. 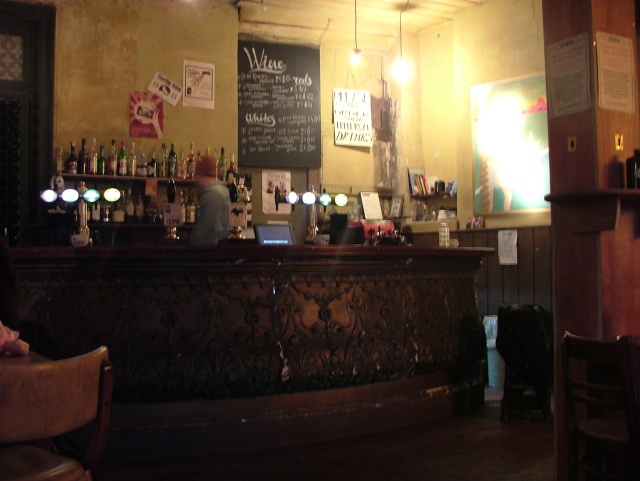 Who would guess this was a stage prop?

I first read about Wilton’s in Spitalfields Life and checked the website to book my guided history tour. These tours continue to run weekly along with a diverse programme of  entertainment including theatre, music, comedy, cinema and cabaret. Or of course you could always just step back in time and pop into the Mahoghany Bar for a drink!

To me the fact that we can still celebrate the heritage of WIlton’s is little short of a miracle when all that is left of another similar enterprise just around the corner is a row of bollards marking the site of the Royal Brunswick Theatre! It is a testimony to the various uses to which the building has been put and the dedication and commitment of the conservationists and friends of the music hall who refused to let it die…

I am a garden designer living and working in rural Worcestershire For more information and to see examples of my work see www.anneguygardendesigns.co.uk
View all posts by Anne Guy →
This entry was posted in London and tagged Hawksmoor Churches, London, London's East End, Thames, Tobacco Dock, Town of Ramsgate, Wapping, Wilton's Music Hall. Bookmark the permalink.

3 Responses to Wapping and Wilton’s